A fire alarm system is a unit made of several devices, which uses visual and audio signalization to warn people about a possible fire, smoke, or carbon monoxide occurrence in the area of coverage. Fire alarms are generally set in fire alarm systems to provide zonal coverage for residences and commercial buildings. The warning signal is either a loudly siren/bell or a flashing light, or it can include both. Some fire alarm systems use extra warnings, such as sending a voice message or making a phone call. 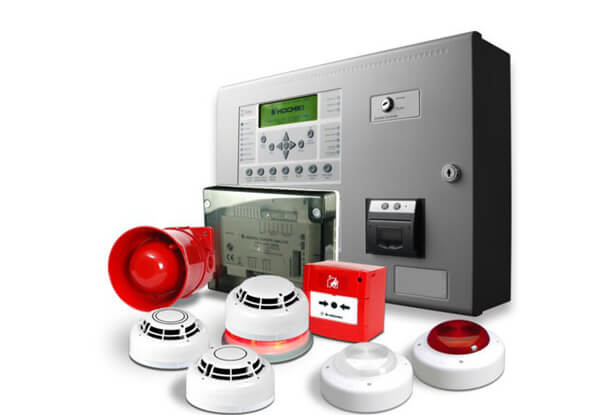 Why buying a fire alarm system

Buying a fire alarm system is most important things you can do to keep your home safe. In case a fire occurs, you aware to become aware of it as soon as possible so that you can either put it out or escape.

The first step to protecting lives and property from the consequences of fires is setting up a high-quality fire alarm system. After installing it, it’s important that you keep the system well-maintained to make sure it’s always working at its best.

How a Fire Alarm System Works

Synchronous fire alarm systems use automatic functions to detect the occurrence of an event that may result in a fire. They collect a signal from a fire sensor (smoke, heat or carbon monoxide detector) and automatically transmit it to the fire alarm panel.

In wireless systems, the signal from the detectors to the control panel is transmitted with radio frequency. Heat sensors usually have built-in thermistors to sense the heat. Carbon monoxide detectors use integrated chemical, electrochemical, op to-chemical or biomimetic cells to trace the gas. Smoke sensors use photo electricity or ionization to detect smoke or combustion particles. Combined detectors use a number of detection mechanisms.

The fire alarm panel activates the flashers or the sounders, turns on sprinklers (or they can be activated along with the detector), or makes a call to the authorities or to the occupants. If the fire alarm system is addressable, the source of the occurrence will be pointed on the control panel. Users on separate floors or in connected buildings can be notified in several ways: by horns, gongs and loudspeaker messages advising appropriate action for each department. 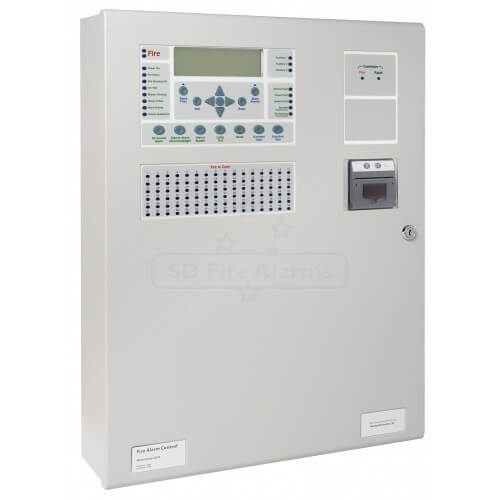 Hybrid fire alarm system integrate addressable radio loops with hardwired conventional fire alarm systems of all levels of sophistication into a single panel and create a ‘hybrid’ solution, which is cost-effective as well as performance-effective to consider wireless fire alarm as part (if not all) of an installation in a wide range of applications situations – both new builds and refurbishments/reconfigurations or add-ons.

The conventional fire alarm system includes several different “zones” that are hardwired to the same cable that connects them to a fire alarm control panel. These systems allow you to be able to put separate fire alarms in each part of your building and assists to monitor if an alarm is broken.

The control panel displays a signal when these components initiate. Conventional systems are inexpensive and work well in small facilities, such as offices.

The emergency signal produced by the detector can be seen on the display of fire alarm but can't be precisely tracked to which component it is in the building, which becomes problematic in this case can choose the addressable fire alarm system. 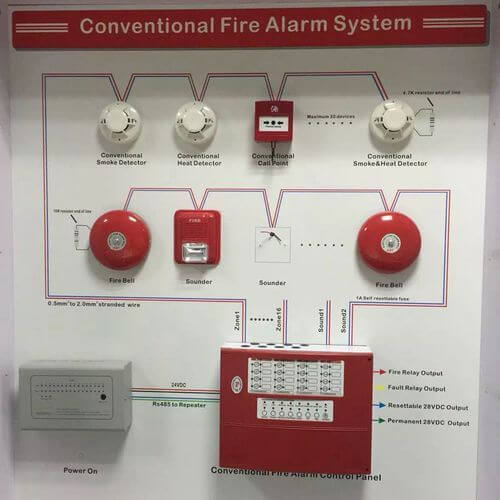 When one of the system’s components fires the emergency signal, it indicates the component’s address on the fire alarm panel. Large facilities utilize these systems to quickly pinpoint the trouble signal origin. This gives the critical time to people to evacuate and time to fire fighting system and the responsible people to initiate the fire fighting system. It reduces the time by eliminating the need to search for the component that produced the signal.

All the Fire alarm system products we offer are widely range by our valuable clients for their exclusive features such as high strength, durability and easy installation. Adding to this, these systems are used to give warning of fire well in advance so that immediate action can be taken and people get enough time to evacuate the premises.